Dental microwear features range in size from submicron to about one millimeter. To collect data on such small features, Dr. Walker's lab has been using a surface profilometer and an interference microscope, which are both interfaced to PCs. The interference microscope works on the principle that when two light waves are brought together, they interact. In practice the microscope splits a light beam, with one beam reflecting off the specimen and the other directed at a reference mirror. When the beams are recombined, the number of degrees they are out of phase can be translated into a highly accurate map of the surface's microtopography.

The research team has found enormous benefit in using the interference microscope over previous methods. Instead of laboriously digitizing individual microwear features by hand, they can now measure the surface topography directly. In less than a minute their scanning equipment can record the x, y and z coordinates of more than 300,000 surface points. Typical data files range from less than 100K to over a megabyte, depending on the region examined and the scanning resolution, and are imported directly into DADiSP.

With DADiSP, Walker and Hagen can view and analyze up to a dozen different surface scans in parallel using a variety of filters, spectral analyses and data integration. Thus, they can easily examine the statistically significant differences and similarities in dental microwear among 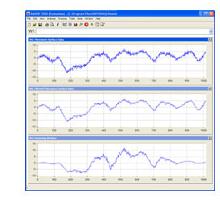 The screen shots show an example DADiSP worksheet created by Ed Hagen. Window 1 (W1) displays data on the scanned profile of a microworn surface, which in this case is an abraded glass slide. The original series is filtered with a high-order, high-pass filter (in a window not shown) to remove any data on scales larger than 200 microns. The results are displayed in W2. After the data are passed through a standard hamming 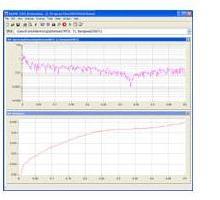 window (W3), a fourier spectrum of the surface profile in W4 gives a distribution of spatial frequencies, or microwear feature sizes. Finally, the normalized integral of the spectrum in W5 is used to calculate mean feature size among other statistics.

Once their surface analysis technique has been thoroughly worked out with model surfaces, Dr. Walker plans to apply it to microwear on the teeth of early hominids and related animals found in the same region. His ultimate goal is to provide a sounder scientific basis for describing the diets of our earliest ancestors.

To Dr. Walker's research team, it is becoming clear that simple analogies between the microwear patterns on the teeth of living animals of known diet and those of extinct animals with similar microwear patterns can lead to serious errors in reconstructing the diets of extinct species. The amounts and types of grit in an animal's diet determine the nature and extent of dental microwear. Differences in local geology, soil formation, drought and volcanic eruption history can all affect the quantity and quality of ambient grit in an animal's diet.

Rather than analyze a single individual out of its environmental context, the UCSB group plans to investigate dental microwear from the perspective of the faunal assemblage, i.e. the entire collection of animal bones found in a specific region. With the sheer amount of data that needs to be viewed and compared, "DADiSP will play a significant role in our ongoing research," says Dr. Walker.