The Solar Disk Sextant (SDS) instrument was jointly developed by NASA and Yale University to measure the solar diameter at a very precise (milliarcs) level. The SDS has flown several times on stratospheric balloons. Each flight of the SDS generates four gigabytes of data which Laurence Twigg, a contractor with NASA/Goddard Space Flight Center, Laboratory for Atmospheres, analyzes and reduces. DADiSP plays a central role in the reduction and analysis of this data.

There are three main reduction steps before the final result during which 100-200 auxiliary parameters are generated to monitor the "goodness" of the data reduction process. Additionally, the solar diameter over time is also checked against numerous quantities to look for correlations which might indicate data reduction problems. The command file feature of DADiSP is heavily used to automate this correlation, plotting, and report process. 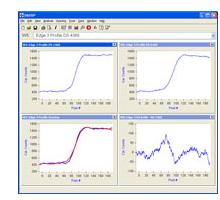 The Worksheet shows one of these automated diagnostic plots. In this example, the observed brightness profile at the edge of the solar disk is checked to determine if it has changed during the flight of the SDS. Two edge brightness profiles taken about four hours apart are shown in Windows 5 and 6 of Figure 1. An overlay of the profiles is shown in Window 7. A correlation analysis was done and the difference between these two profiles is shown in Window 8. Any change in the instrument, such as a focus change, can easily be detected using this method. As previously noted the entire process is automated using a command file within DADiSP.

In addition to measuring solar diameter, solar oblateness was also measured. Due to the effects of rotation and change in rotation rate, the sun is not perfectly spherical but slightly (at one part in 106 level) oblate. By carefully measuring this oblateness and its variations with time, information may be gained which is useful in 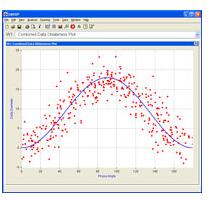 fields as diverse as fluid mechanics and relativity. To measure oblateness, the telescope is rotated every few minutes, measuring 17 different diameters in about 40 minutes. The results of the oblateness measurements for the SDS flight are shown in the Worksheet.

Calibrated data from these experiments can also be used for several other solar physics investigations. DADiSP also aids in speeding up the final instrument checkout and calibration in the field. Using the data from this flight and subsequent flights, the behavior of the solar diameter will continue to be monitored with particular interest in secular changes in the diameter which might signal luminosity changes. DADiSP has allowed the large volume of data generated by this project to be effectively reduced into usable data for solar research. According to Twigg, "To sum up, I find that the use of DADiSP to visually summarize the many diagnostic variables generated by the SDS data analysis procedure, show any correlations that exist between them, and then automatically print out those correlations of interest to has tremendously speeded up the entire SDS data reduction and analysis process."