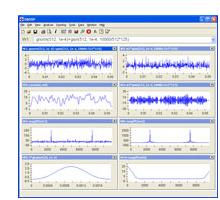 The Acoustical Integration and Test Group has designed a unit called the Special Test Equipment (STE) that simulates the acoustical array on the submarine. The STE accepts external commands from a workstation, drives the Unit Under Test (UUT), and collects and writes data back to the workstation.

One of the tools that Mehul Motani, a Design Engineer at Lockheed Martin, uses in the integration and testing of the UUTs is DADiSP. DADiSP is run on the workstation and is used to generate the acoustical input data which drives the STE. Once the UUT processes the data, the output data is collected by the workstation for further analysis. DADiSP is used to extract/sort the data and for signal processing including FFTs, correlation, and filtering. The results are displayed graphically within DADiSP.

Window 1 shows a noisy signal which consists of a single tone signal plus normally distributed noise. One of the signal processing paths in the beamformer filters out noise. To accomplish this the signal is basebanded, which means its center frequency is set to zero. The noise is then removed by filtering this signal through a low pass filter generated by a 20 point Kaiser window as shown in Window 9. The filtered signal is then upshifted back to its original higher frequency. The basebanded signal, the filtered signal, and the upshifted signal are displayed in Windows 2, 3, and 4 respectively. Window 5 shows the original noisy signal and the spectrum of the filtered clean signal is shown in Window 8. By comparing these two signals one can easily see that much of the noise has clearly been filtered out of the signal in Window 8.

Since DADiSP can easily generate and manipulate series of numbers, it was also used to generate the acoustical input data. DADiSP was used to generate bandlimited noise as an example of one type input data. Random noise has an infinite flat spectrum which is composed of all frequencies with equal magnitudes. Bandlimited noise is random noise that has frequency components only in a desired frequency band. The noise was generated by adding randomly phased sine waves. The 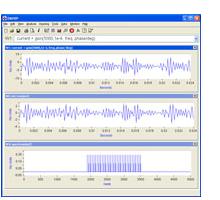 DADiSP for Simulation and Signal Processing

Thus DADiSP not only enables the simulation of the acoustical input data, but also permits the simulation of the signal processing that occurs in the beamformer. The simulation of the signal processing allows Lockheed Martin to predict the signal-to-noise ratios at the output. After running a test, the actual signal-to-noise ratio is computed and compared to the theoretical value. According to Mehul Motani, "The advantage of DADiSP is twofold. First, there is its functionality, which makes DADiSP a useful tool. Second, there is ease-of-use, which makes DADiSP a practical tool. The combination of usefulness and ease-of-use makes DADiSP a great asset in any environment. We use DADiSP to do a lot of signal processing and simulation." In this way DADiSP aids in the development and manufacturing of the acoustical processing systems for submarine combat systems, providing a safer more effective environment for naval personnel.