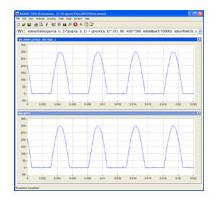 DADiSP from DSP Development Corporation helped to determine the validity of this voltage meter. A DFR channel monitors the generator field voltage allowing a snapshot record to be taken. This data is used to calculate the root mean square (rms) voltage for comparison to the meter in question.

The comparison was easily accomplished using DADiSP. The six windows opened in DADiSP to graphically represent the steps of the procedure are shown in the screenshots. Window 1 contains the raw data, taken from the DFR, from which the rms voltage will be calculated. Window 2 allows the raw data to be correctly scaled by using a voltage transducer scaling factor. In this case, the scale factor was 1.0 since the DFR record which was imported had already been scaled. 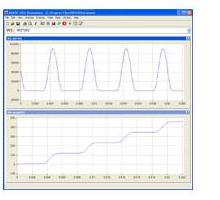 Window 3 shows the square of the time series of the voltage data in Window 2, the integral of this squared voltage function is calculated and displayed in Window 4. Window 5 defines the period of the field voltage waveform as a continuous function of time rather than as a discrete function. The basic field voltage frequency is 180 Hz. Consequently, the function in Window 5 allows the calculation of true RMS voltage as a continuous function rather than at discrete points such as 1/180 sec, 2/180 sec, etc. The calculated rms voltage of the generator field voltage is displayed in Window 6. Note that it is defined as the square root of the integral of the voltage squared, divided by the period of the waveform. 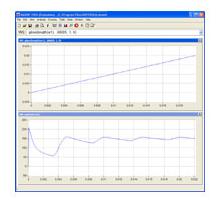 The square root and division by the waveform period are accomplished in Window 6 to yield the final answer. The value of the field voltage is measured as 233.1 volts rms which agrees to within 2.9% of the 240 volts dc reading on the analog meter being tested.

Using DADiSP, these calculations were set up and accomplished within 30 minutes of importing the data from the DFR, allowing the accuracy of the meter to be confirmed within an hour from the original inquiry. Any subsequent calculations of the rms values will take considerably less time since the sequence is now established and saved for future use.

DADiSP was also shown to be useful when the Arizona Public Service Company did a power analysis survey for an industrial customer. The voltage dip during normal breaker clearing times was suspected in causing a problem with the customer's sensitive electronically controlled loads. A DFR record of the customer's entire three phase voltage and current load waveforms was imported into DADiSP. The DFR record provided data on the magnitude of the voltage drop along with some unexpected data on the harmonic content of the load. DADiSP's data analysis features allowed the harmonic content of the load to be analyzed. The spectrum of the current showed the presence of large fifth, eleventh, seventeenth, and twenty-third harmonics of 60 Hz. The level of current was also calculated, as in the previous example, to be 218.5 amperes rms. This was used to check against portable power monitoring instrumentation with a suspected inaccuracy in the rms value.

Arizona Public Service Company has found DADiSP to be a valuable tool in the analysis of DFR records. It is also a common tool for use with all fault recorders, data acquisition boards and phasor measurement units (PMUs) on their systems. They also expect the increased usage of DADiSP as PMUs augment DFRs on their systems for the purpose of disturbance monitoring. According to J. A. Demcko, "DADiSP is a useful tool for the detailed analysis of DFR records. Its real 'claim to fame' is for its power, flexibility, multi-platform support and ability to accept and analyze almost any DFR manufacturer's record."

This brief, in part, was originally presented at the Annual Fault and Disturbance Analysis Conference at Texas A & M University.