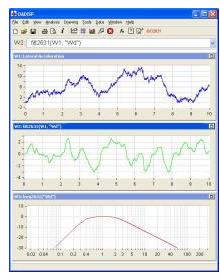 The international ISO 2631 Standard outlines methods for the measurement, evaluation and assessment of human exposure to Whole - Body Vibration (WBV). An evaluation of the effect of exposure to vibration on humans is performed by weighting the root-mean of acceleration data transmitted via supporting structures.

It is necessary to use standard methods for frequency weighting so that results from different measurements using different equipment can be compared. The ISO 2631 standard describes weighting filters for combinations of sitting, standing, and recumbant positions for the analysis of health, discomfort, perception and motion sickness.

Several frequency curves are presented covering the most significant combinations of vibration axes and effects (health, comfort, perception, motion sickness). Three of these curves are used in the evaluation of vibration from the point of view of health effects, and two in the procedure of assessment of vibration severity.

The desired filter coefficients are generated by converting the analog filter specifications detailed in the supported standards into the digital domain using the bilinear transform method. Because the filter is comprised of several cascaded sub-filters, the coefficients of each sub-filter are calculated and combined via convolution to produce the equivalent coefficients of the resulting monolithic digital filter.

The resulting coefficients are in second order CASCADE form and are used to process the data with high numeric precision and stability.


To display the ISO 2631 Wk weighting curve in the frequency domain:


The dialog box interface makes selecting and processing data with a frequency weighting filter as simple as a mouse click.

DADiSP/ISO 2631 requires DADiSP 6.0 B17 or higher. Contact us for information about updating your current version of DADiSP.