Dr. Dan Davison at the University of Houston is using DADiSP to examine the human beta-hemoglobin gene complex for these long range periodicities. The method used to accomplish this is fairly simple and straight forward. The DNA sequence is first encoded (A=1, C=2, G=3, and T=4). 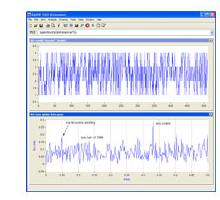 A plot of the delta gene from the beta-hemoglobin complex is generated and displayed in Window 1. An area is then selected containing just the coding region with no upstream or downstream regions.

The encoded region is subsequently run through the Spectrum routine on the FFT menu in DADiSP. Because the delta gene is a coding region, the resultant graph in Window 2 shows a prominent peak at 0.33, corresponding to a periodicity of 3. This corresponding group of three nucleotides is biologically referred to as a codon, part of the protein coding region. Thus DADiSP can effectively be used to detect coding regions in DNA, an important problem in molecular biology.

DADiSP can also be used to interpret other features in the DNA. The group of three peaks around 0.10, 0.11, and 0.12 in Window 2 are a measure of the simplest helical turns in DNA, which average 11 nucleotides per turn.

Some of the other peaks correspond to multiples of the 0.3 and 0.11 peaks. There is also a strong peak above the vicinity of 0.01 which is an echo of how the DNA is wound around a group of proteins known as the nucleosome. The nucleosome plays an important part in how the DNA is packed into the chromosomes in every cell.

In this way DADiSP can enhance the unraveling of the human gene complexes and perhaps provide a tool for unlocking the mysteries of how DNA controls the diversity found in life. According to Dr. Dan Davison, "DADiSP makes this kind of analysis very easy to do, so that I only have to worry about the science, not the programming."