The Society of Automotive Engineers and the international ISO 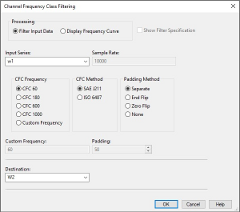 outline methods for assessment of injury potential from impacts and jolts. Testing typically requires the analysis of accelerations and forces generated during impact tests and obtained from transducers mounted in human-like manikins and test forms.

The SAE J211 standard requires signals from impact tests to be filtered using one of four channel frequency classes (CFC) of low-pass filters and specifies acceptable frequency response for each filter class. The four filters are designated as CFC 60, 180, 600, and 1000. The specification was derived from an analog Butterworth filter prototype where the cut-off frequency is set to 5/3 times the CFC frequency. The filter classes are typically employed in the following impact test scenarios:

The DADiSP/CFC Module implements a 4 pole digital Butterworth low pass filter by passing the data forward and then backward through a 2 pole filter. The resulting series has no phase shift and corresponds to either the SAE J211 or ISO 5487 CFC filter specification.

The 2 pole filter is realized efficiently in the time domain with a simple difference equation:


where the aN and bN coefficients are derived from the 2 pole digital Butterworth filter designed using the Bilinear Transform method.

To mitigate the non-causal effects of the filter on data with large transients, the beginning and end segments of the input can be padded with a mirror image. The new initial conditions for the filter equation are then computed and the padded data is filtered.

The DADiSP/CFC module supports all four standard frequency classes. Custom frequency classes are also supported. Both the SAE J211 and ISO 6487 standards are available and multiple segment padding methods may be selected.

The design and processing of data with a CFC filter is accomplished in one easy step. Both an interactive dialog box interface and simple command line functions are provided. For example, to process acceleration data in Window 1 with a SAE J211 compliant CFC 60 filter:


The dialog box interface makes selecting and processing data with a CFC filter as simple as a mouse click.

DADiSP/CFC requires DADiSP 6.7 B01 or higher. Contact us for information about updating your current version of DADiSP.