Advances in computer technology have made it possible to record and analyze handwriting. Meeks uses a WACOM digitizer interfaced to a personal computer to sample and record the position of the pen tip during the writing process. The digitizer has a sampling rate of 205 points/sec with a resolution of 0.01 mm. DADiSP was used to analyze the recorded x and y position of the pen, calculate pen speed, and measure pauses in pen motion. This system allows even small rapid handwriting to be recorded. The WACOM system also has the advantage of recording the axial force of the pen or the pen pressure against the paper.

It is a well-known fact that many children with ADHD have difficulty writing neatly and legibly. Furthermore, pediatricians and clinicians have noted that the handwriting of these children may improve markedly when they are medicated with Ritalin. Because of this, Meeks decided to study the handwriting of children with ADHD when they are unmedicated and after they have received their prescribed medication. 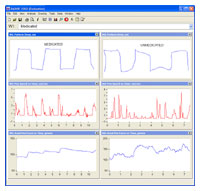 The effect of medication on these drawings is clearly evident in the comparison of all three plots. When the boy was on medication the drawing is better formed. In this drawing, the boy's pen speed is slower, his total drawing time is longer and his pen force is more nearly constant.

The goal of Meeks Associates in doing this study is to develop a method of assessment of ADHD based on the accurate measurement of the children's handwriting. According to Meeks, "With DADiSP we can investigate the process of handwriting in detail: how pen speed and pen pressure change with time and where pauses occur." It is hoped that this experiment will provide an objective test for the diagnosis of ADHD. The study may also be extended to evaluate the effect of Ritalin on handwriting and may be used in the future to verify the correct dosage of Ritalin used to properly medicate a child.