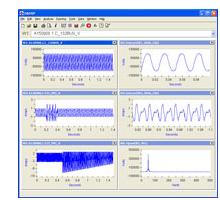 The investigative team at the Queensland Electricity Commission (QEC) used DADiSP, the graphic display and data management software by DSP Development Corporation, to determine the cause of the failures. With DADiSP and some creative problem-solving techniques, the engineers identified the troublesome harmonics in the system and traced their source.

About 30 current and voltage signals were measured using a data acquisition system controlled by a personal computer. The data acquisition system was triggered by high current levels in the filter bank which indicated a 6th harmonic resonance. Recording duration was about 2 seconds, with a sampling rate of 2560 Hz per channel. Recorded data were translated from HP format into a binary file and imported into DADiSP for post-processing. Voltage and current harmonic components were extracted using Fast Fourier Transforms (FFTs). A DADiSP macro which applied a frequency-related phase shift to the phase output of the FFT was written and used to compensate for skewing errors caused by the sequential sampling of the signals.

Since data had been acquired at a fixed sampling rate even though the power system frequency varied by as much as 0.2 Hz, spectral leakage 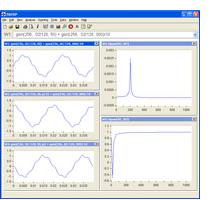 was a serious threat to accuracy. The investigative team reduced leakage errors to sufficiently low levels using DADiSP's Hanning window function, then verified them using test signals created with DADiSP's 'G' (Generate) functions. Another macro was written which acted on two series, a voltage and a current, to produce a signed power flow vs. frequency output. When the problems were isolated it was found that the transformers under investigation had gone into saturation in the presence of unsymmetrical load currents - currents containing both even and odd harmonics. The 6th harmonic components were found to be exciting the resonant condition, and particularly bad resonances were found to occur when the large power transformers were energized in the vicinity of the filter bank. These resonances produced high voltage stresses on the capacitors which contributed to their failure.

T. A. George, one of the investigators on the team, especially appreciated DADiSP's help on the project. In the report he wrote on the investigation, he states, "The ability of DADiSP to automate the bulk of the signal processing through the use of macros and pre-defined spreadsheets contributed to tremendous savings in manpower." He says that his team will use DADiSP as a standard tool to analyze similar problems in the future - not that they intend to have further catastrophic failures.