Dr. Haubold uses DADiSP, the graphic display and data management software tool from DSP Development Corporation, to display, analyze, and manage solar activity data. Its storage abilities, user-friendliness, and wide variety of built-in analysis functions make it indispensable to his search for patterns in a baffling array of information.

Neutrinos are weakly interacting particles emitted in the hottest and densest regions of cosmic bodies. Since neutrinos pass through most kinds of matter, it is assumed that they have never been disrupted from the distribution they had when they first came into being. For this reason, astronomic observers study them to get a "blueprint" of the internal structure of stars. The rate at which neutrinos flow out of the Sun can provide information about the age and evolution of the Sun and of our own solar system; however, the theoretical rate of flow of solar neutrinos does not correlate with the observed neutrino capture rate, which has been recorded at the Homestake Gold Mine in Lead, South Dakota, USA, since 1970. Standard solar models represent the center of the Sun as a gravitationally stabilized fusion reactor from which a steady outflow of neutrinos is expected; however, this steady outflow is not observed.

Dr. Haubold thinks that the difference between the theoretical and observed rates of neutrino flow might be attributable to variations in the Sun's neutrino output. He believes that the flow might be periodic like other kinds of solar activity, such as sunspots. He uses DADiSP, which he has running on a personal computer, to perform Fourier analysis on neutrino data. 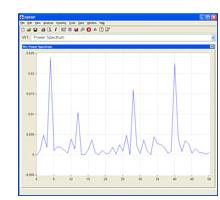 Dr. Haubold receives data either on paper or in files sent via electronic mail from other researchers. The data sets are small, containing somewhere between fifty and five hundred measurements. Dr. Haubold downloads or types them into a DADiSP labbook, and then uses DADiSP's FFT and power spectrum functions, among others, to manipulate data and detect patterns. "I use every DADiSP [mathematical function] to see what's there," he says. DADiSP's graphic display and ease of use allow him to try many operations and see the results immediately.

Dr. Haubold says, "DADiSP is an ideal package for analyzing this type of astrophysical data. Every astrophysicist should apply [it] to data that have a harmonic content." Astrophysicists all over the world have been participating in the effort to resolve the solar neutrino problem. Perhaps one of the most puzzling scientific questions of our time will be resolved with the help of DADiSP.