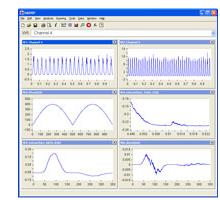 PMTI uses DADiSP, the graphic display and data management software from DSP Development Corporation, as well as DADiSP/Filters. Barry Shepherd, Department Head of Marine Engineering, uses these tools to teach students the essentials of data acquisition and analysis for computer-assisted engineering. DADiSP is employed as part of a diesel engine monitoring system that the students are exposed to during their three-year engineering apprentice program.

PMTI's computer system, built around a personal computer, was designed by students and faculty in a cooperative effort. Its primary functions are to produce an automated heat balance in an animated bar chart form, and to display cylinder pressure diagrams on screen to process cylinder pressure data. The diesel engine being monitored is a four-cylinder Perkins 4.108 developing 41 kW at 4000 rpm and driving a Froude hydraulic dynamometer. It incorporates an analysis system, which includes cylinder and fuel pressure sensors, an injector lift transducer, and thermocouples that sense temperature transients. Magnetic pick-up proximity sensors sense speed and crank angle and are used to synchronize other sensors to engine speed. An oscilloscope is used to monitor combustion-related phenomena. 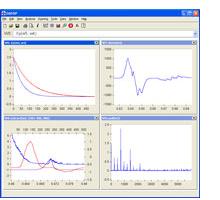 In a typical project, students run an engine up to temperature and monitor cylinder pressure conditions over a variety of loads. The data are continuously acquired by the software acquisition system at a sampling rate of either 13250 Hz or 300 Hz, depending upon the application: the high speed is necessary for monitoring the internal cylinder conditions; the low speed is used for thermocouple readings for heat balance computations. Data are continuously downloaded to the PC's hard disk for processing with DADiSP. Plots are generated of the engine functions being monitored - for instance, cylinder pressure vs. crank angle and its derivative.

Mr. Shepherd, Department Head of Marine Engineering, states that using DADiSP in this way "gives students a window" into the engine cylinder. DADiSP allows them to study combustion-related phenomena in greater detail than would otherwise be possible. According to his article on the system for Marine Engineering Digest, PMTI's apprentice-ship program is designed to teach students through application of computers, that their function is "to make conclusions on the acquired data and leave the ponderous activity of collecting data to the computers." He mentions that, in addition to working with DADiSP, students are required to perform all calculations and draw plots by hand, so they'll know what to do if they get caught at sea without a functional computer. Shepherd reports that PMTI plans to expand their computer system to include a database system for spare parts inventory, planned maintenance, condition monitoring systems and simulation - always keeping DADiSP as an integral part.