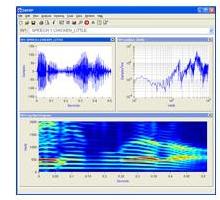 Dr. Boothroyd has chosen DADiSP, the graphic display and data processing software from DSP Development Corporation. DADiSP assists his students both in grasping fundamental concepts and in conducting advanced research.

CUNY Speech and Hearing Sciences researchers have DADiSP running on personal computers. For most applications, they sample speech at a rate of 20 kHz and 12 bits, but they have acquired a data acquisition board which enables them to sample at 16 bits and 22 or 44 kHz, in mono and stereo. For D/A and A/D they currently use Data Translation boards. The analog output interface, which they devised themselves, contains an anti-imaging filter and a low-noise, low-distortion amplifier terminating in a passive attenuator. Except for its ability to generate high output levels, which is useful for working with hearing-impaired people, this interface will be made largely redundant by commercial boards.

Dr. Boothroyd uses DADiSP in the Speech and Hearing labs to introduce students to Fourier analysis and sound synthesis. DADiSP is initially 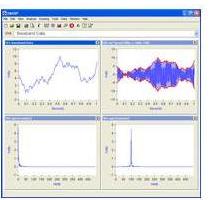 used for exercises involving the generation and addition of sinusoids. Further exercises demonstrate the multiplication of waveforms and the spectral consequences of amplitude modulation. These topics have relevance to numerous issues in hearing science, speech science, and audiology, including frequency analysis in the inner ear, spectral splatter from test tones, and harmonic intermodulation distortion from hearing aid non-linearity. Dr. Boothroyd says that the fact that students can immediately visualize results with DADiSP "greatly accelerates learning and understanding."

Students at CUNY also use DADiSP for work in psychoacoustics, the study of the relationship between sound stimulus and sound sensation. Psychoacoustic experiments typically require the presentation of stimuli whose properties change in small steps contingent on subject response. In the early days of this research, stimuli were generated and controlled by analog equipment; recently, however, there has been a transition through digital control of analog systems to complete digitization of these experiments. According to Dr. Boothroyd, DADiSP "provides students with an easy entree into this work" by making it possible for them to generate stimulus sets which vary precisely along one dimension. The new 16-bit multimedia board enables students to conduct psychoacoustic research with nothing more than a computer and a pair of headphones, which allows them to carry out field studies in schools and hospitals. This freedom is a far cry from the days when experiments had to be conducted in the laboratory using a rack full of equipment.

Hearing aid research is an important application of the speech and hearing sciences, and at CUNY, DADiSP is used to investigate how a nonlinear hearing aid affects the properties of speech. Speech signals are so complex that it is difficult to predict exactly how a nonlinear hearing aid will respond. CUNY's researchers have developed a technique to measure the spectral distribution of key parameters of individual speech sounds. Speech samples are recorded and imported into a DADiSP worksheet, where amplitude spectra are generated and exported to a BASIC program. The program integrates energy over a moving third-octave window and returns the result to DADiSP. Spectra of several tokens of a single word or sound are averaged, and the frequencies and intensities of key regions are combined to produce the desired distribution. DADiSP is used in CUNY's Speech and Hearing program to pilot digital signal-processing algorithms for the development of software for real-time processing. Once a worksheet is set up, researchers import recorded speech a word or phrase at a time. From there, the processed version can be exported for off-line listening experiments

DADiSP's uses in the CUNY Speech and Hearing labs revolutionize methods of research in the field. Dr. Boothroyd says that DADiSP "has proved to be highly effective as a teaching and research tool."