The Hayes team tested its disc brake in the field at Piscah National Forest. A mountain bike fitted with the SpeedCheck Disc Brake was ridden by professional riders down a 40-minute long forest trail in the park. During these rides three critical factors were monitored. The first was the tire patch (skid) load, which translates directly to brake torque. The second factor monitored was the brake pressure actually used during these mountain rides, which was then used to determine life cycle fatigue factors. The final factor examined was the brake temperature rise during the test ride. Because the SpeedCheck Disc Brake is a sealed hydraulic brake system, which reacts to heat differently than an open braking system, a dramatic temperature change could cause brake drag in the SpeedCheck Disc Brake.

The data acquisition system used during these tests was the SOMAT MTG, consisting of a single high resolution analog input channel. This one channel was used to monitor both brake pressure and temperature because cost and space limitations prohibited the use of two channels. Using a timer circuit and a miniature relay, the two signals being monitored were switched on the single channel. Temperature was recorded approximately once every second while the relay monitored brake pressure the remainder of the time.

Conine and Blaszczyk used DADiSP to display and analyze the data from these test rides. In the worksheet shown, the data from the digital recorder is displayed in Windows 1, 3, and 6 and in Window 8 of the second worksheet. Window 1 is the speed data read from a fabricated infrared pickup, which generated pulses corresponding to slots in the brake disc. The spikes in the data represent vibrations in the wheel which were picked up by 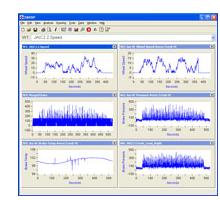 the infrared sensor. These extraneous spikes are removed using the REPLACE command in DADiSP and the results are displayed in Window 2.

Windows 6 and 8 are strain gauge measurements from the bicycle forks which were calculated in the data acquisition system. The gauges were mounted and connected so that only bending load outputs from the forks were measured. The negative readings seen in this data correspond to the weight of the rider forcing the forks forward as he rides over rough terrain. The brake pressure is plotted on the y axis versus the strain on the x axis for the right and left forks in Windows 7 and 9 respectively. The points on these graphs give a general representation of where the majority of the fork strains fall in relation to the brake pressure. 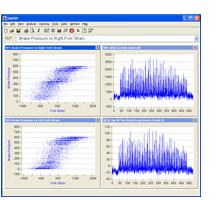 The data for the tire patch load during the test ride is displayed in Window 10. The tire patch load was calculated by taking the average of the fork strain data in Windows 6 and 8 and multiplying by 0.0597, a value determined in laboratory testing by using a force gage to apply force to the bottom of the wheel and recording the strain levels with the brake applied. The tire patch load may be used to determine the deceleration, if the rider's exact weight and the weight of the bike are known. During these tests, however, the main concern was with the structural components.

The data acquired during these field tests determined the parameters to be used during testing with a brake dynamometer, which is used to duplicate actual braking by stopping a calibrated set of spinning weights. DADiSP was instrumental in the analysis of these tests. According to Daniel Conine, "DADiSP gives me the ability to handle large data files which I could not find in any of common spreadsheet packages. The ability to multiplex separate inputs and then extract them from a single recorded channel was critical to accomplishing our mountain bike tests on time with the equipment already available." The results of these tests were used to further strengthen and refine the SpeedCheck Disc Brake until production. Since its release, the brake has proven to be a popular product with thousands of satisfied customers.