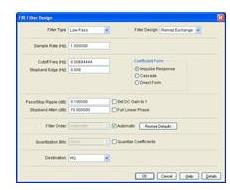 The comprehensive search for other planetary systems has been made possible by recent advances in remote sensing technology. The strategy chosen uses an advanced signal processor to search the microwave region of the spectrum for signals from other solar systems with life supporting planets. The microwave region of 1,000 MHz to 10,000 MHz was selected because it is one of the quietest frequency bands with minimal background noise. Due to the low noise in this region, it was assumed that other life forms wishing to establish interstellar communication might also choose this band. This High Resolution Microwave Survey (HRMS) is presently being conducted by the Solar Systems Exploration Division of the NASA Office of Space Science and Exploration. The survey is managed by the NASA Ames Research Center (ARC) at Moffett Field with the work being carried out by ARC, the Jet Propulsion Laboratory in Pasadena, California, participating universities, and the NASA Deep Space Network.

The survey utilizes two different complementary search modes. One mode consists of an all-sky survey to observe the celestial sphere over the entire range from 1,000 MHz to 10,000 MHz. The second mode consists of a high sensitivity, targeted search over the 1,000 MHz to 3000 MHz range for weak signals originating near stars similar to our sun but within 100 light years from earth. The backbone of the system used to conduct these surveys is a fully digital, real-time, multichannel spectrum analyzer (MCSA). The MCSA is a spectrometer, or in this case a filter bank, which takes the 10 MHz bandwidth in-phase and quadrature input signal (complex signal) from the radio telescope and splits it into 14 million frequency channels at a resolution of about 1 Hz. It also simultaneously splits the signal into 5 coarser resolutions. The higher 1 Hz resolution is useful for high sensitivity detection of continuous waves while all six resolutions are used to detect pulsed sine waves with different time durations.

The outputs of the MCSA are sent to custom-designed signal detection circuitry to search for the extraterrestrial signals. The MCSA includes 35 printed circuit boards and performs about 50 billion operations per second. It is comprised of two cascading filter banks followed by a discrete Fourier transform processor. The first filter consists of 144 filters (or channels) evenly spread across the input signal frequency band of interest. The output of this first filter bank is passed to the second filter bank which is also made up of 144 filters, further dividing the signal. These two cascading filter banks are followed by a discrete Fourier transform processor (DFT). Because the polyphase filter bank algorithm was used for the efficient implementation and linear phase requirements, Finite Impulse Response (FIR) lowpass filters must be used.

The specification for the FIR lowpass filter calls for a passband ripple of no more then 0.1 dB and a stopband attenuation of at least 70 dB. The bandwidth of the filter is 1/144 of the normalized frequency which spans from 0.0 to 0.5. The requirements suggest a FIR filter of about 2000 taps with an equiripple filter type preferred. 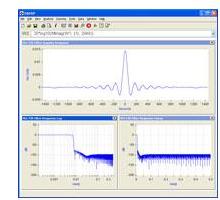 According to Dr. C. K. Chen, formerly of the SETI Institute in Mountain View, California, the generation of the FIR taps is crucial to overall performance of the MSCA. Many of the filter design packages presently on the market can take only up to 500 taps for FIR filter design. DADiSP from DSP Development Corporation was chosen for the FIR filter design because it does not limit the number of taps which can be input to the design.

Dr. Chen reported, "DADiSP computes long FIR coefficients like a breeze and has really speeded our filter design process." The MCSA currently employs a 1,728-tap lowpass filter. Future upgrades are planned for the MSCA which will require the two cascading filters to have 156 channels. Accordingly, the FIR filter length for the first and second filter banks will be 2,184 taps and 1,716 taps respectively. DADiSP allows these future changes to be made easily. The equipment developed for this project was deployed on the radio telescope at Parkes and Mopra, Australia for a six month observation period. In this way DADiSP has been instrumental in the search for signs of extraterrestrial life. In a small but significant way, DADiSP may help change our perception of our universe and our role in it.