DADiSP was chosen as the core data management and analysis tool because of the ease with which it handles large data sets and the fact that it operates on data in a simple, intuitive vectorized notation. With the use of DADiSP and its Filters module, our group has been able to precisely characterize and subtract Clark electrode spectral noise, leaving a true Oxygen Uptake Rate (OUR) curve. This degree of accuracy has not been previously reported in the literature and represents the power of the application of spectral methods to biology. 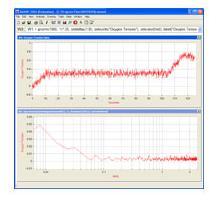 consumption 16 bit signed and time-stamped data was imported to DADiSP (a task made considerably simpler through the use of DADiMP), and redisplayed as a power spectrum. Upon examination of numerous experiments, it became obvious that there was a small, but repeatable band-stop between the noise spectrum and the low frequency data of interest (corresponding to the true slope of oxygen consumption). With this observation, we immediately knew that a solution could be attained via spectral filtering.

Using the Filters module of DADiSP, 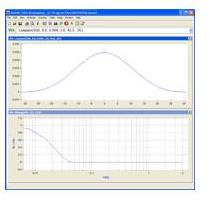 we constructed a 1018th-order Remez-Exchange Finite Impulse Response (FIR) low-pass filter, with a bandpass of 0.004 Hertz and a bandstop of 0.0045 Hertz. Such a feat would be simply impossible with analog-based filtering, which can attain 8th or 12th-order functions at best. DADiSP's convenient, windowed interface made short work of this task, with immediate visual feedback from the filtered data and corresponding power spectra demonstrating true, uncolored OUR curves.

With a valid numerical methodology in hand, we further refined the data 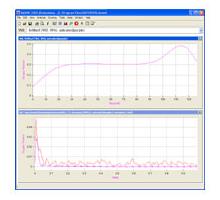 analysis process, calling upon SPL, DADiSP's C/C++ like language, and its spreadsheet-like design to make a truly turnkey system. Once in operation, our application running within DADiSP was successful in accurately analyzing hundreds of megabytes of data within a week's time. The resulting data has been immediately useful in the further refining of our bioreactor topology and represents perhaps the most accurate hepatic oxygen consumption methodology described to date.

Precise and reproducible cellular oxygen consumption measurements represent one component of the overall goal of constructing a functioning bioartificial liver support system which will offer adequate function so as to be usable for human support. As 5,000 people die each year in the U.S. from acute hepatic failure and the associated shortage of cadaveric donors for liver transplantation, it is hoped that this and further developments in bioreactor optimization, made possible by sophisticated numerical solutions, will contribute towards the construction of highly optimized man-made organs to save lives.

A powerful feature of DADiSP is its vectorized approach to numerical methods. Similar attempts were first tried in two other popular high-end numerical analysis packages. One program, a language for technical computing, was simply too difficult to use. The other program, a fully integrated technical computing system, did not allow for multiple time scales. On the other hand, data analysis within DADiSP has been, and continues to be, a pleasure for our research group.