The Department of Obstetrics/Gynecology, School of Medicine

The Division of Reproductive Biology and Medicine specializes in the diagnosis and treatment of human infertility.

Although computer-aided sperm analysis (CASA) has become an important tool in male infertility research, some researchers believe that it is proving itself no more accurate than manual measurement techniques. Human sperm motion is extremely complex: they don't swim in straight lines; they move their tails as well as their heads; they change direction. Since the pattern and vigor of a sperm cell's motion is an indicator of its health, it is important to analyze and model this motion accurately.

Sperm motion has to be simplified somewhat in order to be modeled, but it is difficult to know what to simplify. Currently available CASA instruments compute an average sperm path by smoothing a sperm's curvilinear trajectory with a fixed-length running average, and the measurements are taken only from the sperm head. According to researchers Russel Davis, Paul Niswander, and David Katz from the UC Davis Department of Obstetrics and Gynecology, this method of 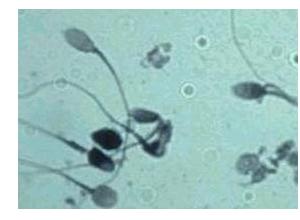 measurement causes a great deal of information to be lost, so that inaccurate conclusions may be drawn about the viability of a sperm sample. Because this type of measurement provides a distorted picture of the paths of irregularly swimming sperm, inaccurate calculations are made for measurements crucial to the evaluation of sperm health, such as the velocity of the average path (VAP), the amplitude of lateral head displacement (ALH), the beat cross frequency (BCF), the wobble of the curvilinear trajectory (WOB), and the straightness of the curvilinear trajectory (STR). Dr. Davis and colleagues feel that a new kind of analysis is required to bring out the hidden patterns in sperm paths, and that new CASA tools are required to implement it.