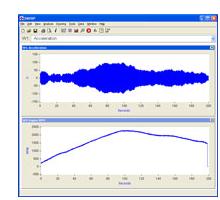 A typical task Rich and his team perform with DADiSP is determining whether resonance occurring in engine-mounted bracketry is a result of engine vibration. Multi-channel acceleration data are recorded from the bracketry and engine while the revolutions per minute (RPM) are swept from idle to maximum. Meanwhile, DADiSP receives data in an empty spreadsheet template while running unattended by means of command files built by the engineers.

The resulting time history is broken into small increments for each channel of acceleration data. Power Spectral Density Plots (PSDs) are performed on these increments; the average RPM for each increment is calculated; and the PSDs for all increments are combined into a waterfall plot. Since a typical data run is large - over 200,000 points per channel - DADiSP runs overnight to perform these operations and produce a hard copy for the morning. Before DADiSP, engineers had to extract segments of data manually, 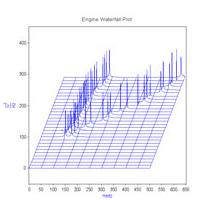 perform PSDs by hand on each segment, and then overlay hard copies to obtain a quasi-waterfall plot. The new method requires significantly fewer hours and fewer people.

Since Ford's data are collected in a special department, reduced according to standard algorithms, and passed on to whomever requested them, there are occasionally processing problems resulting from the fact that the people who acquire data may not know how it will be used. To make matters worse, errors in a data set may be masked if the set is averaged in with a larger sample. DADiSP provides methods for correcting errors, late in data processing, that used to cause a lot of trouble. For example, sometimes it is discovered during analysis that the signal to noise ratio of the acquired data is so low that the shape of the data is masked. It is seldom possible to reacquire the data. Since the expected shape of the data is usually known from previously verified computer models, there is almost always hope for correction. Before DADiSP, engineers had to review and reprocess the data, usually in teams of people both from the department that acquired the data and from the department that wanted to analyze them. This extra step took a long time. Now, DADiSP's digital filter modules clean up the extra noise. Information about the expected shape of the data allows one engineer working alone to filter the original signal and separate signal from noise in minimal time.

Before DADiSP was introduced, approximately 40% of data acquisition expenses were associated with the data reduction and analysis stage: it took too long and required too many people. Data analysis was performed on a mainframe computer, so a job would sit in a queue for a long time, causing delay. Now that the mainframe programs are being transferred to DADiSP templates, the analysis of one channel of data takes about 10 minutes. An entire job can run in half a day. This use of DADiSP has reduced data analysis costs by an estimated 20%.

Rich Bond says he appreciates DADiSP's user-friendliness, which helps make relatively non-trained people productive in very little time. He mentions the case of an engineer who picked up the product and the manual and within a day or so had a very good template working. He 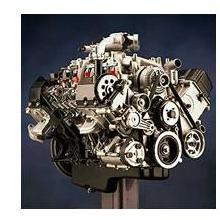 says his division owns other products similar in function to DADiSP, but that "they just kind of sit there." When asked why, he responds, "They are a language; DADiSP has an intuitive feel for how things go. You can actually see things." Rich mentions that he appreciates DADiSP's ability to handle enormous data files. He says that some of the data acquisition runs produce huge sets, consisting of 160 seconds' worth of data sampled at 8000 Hz per channel for 15 minutes. Other runs at lower sampling rates can last up to two hours. He says he and his engineers have no qualms about using DADiSP to handle these large sets when they have to analyze a long run.

Most important to Rich is DADiSP's capability for running unattended by means of command files. "To put a workstation on an engineer's desk with all the network support behind it, you spend about $50,000 to $70,000. Therefore, the computer has got to be running all the time. It can't work eight-to-five, like the engineer does. DADiSP makes it possible for an engineer to hit the button to turn the program on at the end of the day, walk out of here, then come in the morning and find the work all done." He feels it is extremely valuable to have the computer working while the engineer is not.