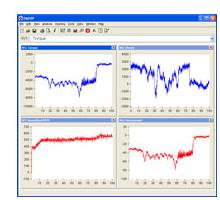 Weasler's R&D team use DADiSP, the graphic display data processing software package by DSP Development Corporation, for the extensive data analysis that makes it possible for them to size drivelines as well as estimate their life length and gain general knowledge of their kinematic characteristics. They have DADiSP running on a desktop machine in the lab and on a portable for their fieldwork.

When Chuck Kocher refers to fieldwork he means fieldwork: his team goes to hay fields, soybean fields, corn fields -- wherever -- to collect data from combines or tractors pulling equipment like hay balers and manure-spreaders. A SoMat Field Computer is used to collect four channels of data from the motion of the prototype machine in the field: two strain gauge (torque and thrust), one analog (angle), and one pulse counter (revolutions per minute). The recorded data are analyzed with DADiSP back at the lab, and a driveline is sized for the machine. Chuck mentions that he especially appreciates DADiSP's capacity for plotting several different variables on one screen all at the same time for the complex analyses his team undertakes. 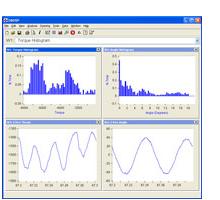 DADiSP is used to simulate field conditions to provide corroboration between field and lab data. The test stands include, among other things, a computer-controlled 200-horsepower dynamometer which simulates a tractor under various load conditions. After a simulation, a DADiSP worksheet is created that includes both field data and test stand data for comparison of the two. Since it is easier to downsize an overlarge driveline than to build up one that's too small, Chuck and colleagues rely on DADiSP to refine their first approximations from the field data, using simulation after simulation in the lab. Chuck reports that this type of work might be impossible for his team if they didn't have DADiSP.

Chuck says that, before DADiSP, most of Weasler's products were tested by customers using that age-old simple algorithm "It works" vs. "It doesn't work." He says that this method, while conclusive, didn't particularly help Weasler Engineering develop new products or refine current ones. He states, "Since we acquired DADiSP, we've tested everything from the drive shaft of a manure-spreader to the steering shaft of a kit car," and adds, "They were both red convertibles, but guess which one was more fun to test?"