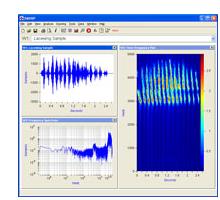 Dr. Henry has discovered DADiSP, the graphic display data processing software created by DSP Development Corporation. He has used it since 1988 to help him analyze and synthesize insect songs, and to keep his lab -- well -- buzzing with activity.

The data acquisition system consists of a CED-1401 Intelligent Laboratory Interface, which can digitally record and play back signals. The laboratory test platform consists of a small cardboard coffee cup with a plastic-wrap cover: a lacewing will "perform" when placed on the plastic-wrap "stage." A piezoelectric transducer picks up signals from the vibrations of the plastic and sends them to a Tektronix AM502 for gain control and to filter out very low and very high frequencies. For digitizing portions of the analog signal, all extraneous high frequencies are removed with a sharp low-pass active filter, and the signal is sampled at the lowest possible rate.

Once a song is recorded, extensive editing and waveform generation take place to prepare the signal for testing on insects. Dr. Henry counts on DADiSP's mathematical capabilities to alter the amplitude of specific signal portions, filter out noise, extract and concatenate signal elements, and generate new waveforms. Once a new test signal has been created in DADiSP, it is played back through a D/A converter and the insect's response is observed. If modifications to this synthetic signal rad- ically alter an insect's behavior, Dr. Henry concludes that a specific signal feature makes a difference to the insects as they choose their mates.

"One of my favorite features of DADiSP is its ability to alter waveforms using array mathematics," says Dr. Henry. He also appreciates the visual representation and nearly instantaneous updating of windows that the program supports. Based on his success with DADiSP in editing and generating signals, he contends that more complex signals can be synthesized, and that the methods he has developed may be applied to a wide range of animal communication and behavioral ecology research.