The Department of Ecology and Evolutionary Biology

The Department of Ecology and Evolutionary Biology specializes in the study of evolution theory and ecology. Some of the areas of study include: animal communication, species origination, taxonomy, behavioral ecology, and the ecology of salt marshes and forests.

The acquisition and analysis of sounds and other complex vibrational signal produced by living organisms are tasks that "beg for automation," as one researcher puts it. Dr. Charles Henry, of the University of Connecticut, synthesizes insect songs to study mating behavior. He studies the songs of green lacewings, a family of small, fragile insects that have been used for years in biological pest control programs. Lacewings produce songs inaudible to human ears but detectable by other lacewings up to a meter away. The song, a complex, substrate-borne low-frequency signal, is produced during courtship and mating by rapid vertical oscillations of the insect's abdomen. To determine which features of a song are most important to the insects who hear them, Dr. Henry conducts experiments in which he plays back selectively modified synthetic songs to test insects and observes their responses.

Setting up a laboratory for the study of lacewing songs or other signals produced by living things can be prohibitively expensive, because several common pieces of equipment can only perform one or two tasks. An analog oscilloscope, for example, displays a signal as a 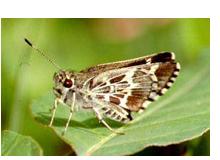 plot of voltage (amplitude) versus time, and is useful for making temporal and amplitude measurements. However, it is inefficient for researchers to determine the pitch of a signal by counting the number of voltage peaks per unit time. Other devices such as spectrum analyzers and sonagraphs can be used to display pitch information but cannot be used for much else. Equipment that can perform a variety of tasks is therefore a boon to Dr. Henry's work. Additionally, and as always in work with living organisms, the lab must be both flexible enough to accommodate great variability and efficient enough to process and store large amounts of data.