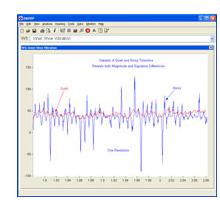 copy of DADiSP and liked it so much that DADiSP is now used extensively throughout Allied/Bendix.

Somewhere between 70 and 120 revolutions of a rotor assembly take place in a six-to-eight second test recording. DADISP is used to sort them out and extract them by means of a macro that Walt wrote himself. Next, time domain, frequency domain, and order domain analyses are carried out on the extracted data, and hardcopy plots are generated. Analysis results are compared to the tested vehicle's component characteristics and to data from other divisions. At this point in the testing cycle, suggestions are made about mechanical modifications that might help produce a quieter or more comfortable brake.

Walt says that before his team started using DADiSP, going from the operations test to the data analysis took up to two weeks. Three computers were running "round the clock" doing data downloading and conversion. Now, this procedure takes under an hour. At their current rate of productivity, the research team appreciates DADiSP's storage capabilities, which enable them to compare one day's process data to the next. Walt says he particularly likes DADiSP's capacity for custom 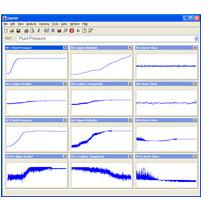 automation. He has built up a library of application-specific macros that he wrote himself to isolate selected data for analysis. He also uses DADiSP at conferences, using its display capabilities for demonstrations.

"We find data-swapping and comparison much easier with DADiSP," says Walt, "especially since other research divisions at Allied now use it." Data downloading, manipulation, and sharing are so easy now that engineers can investigate the physical problems causing excessive vibration much more quickly after testing than they could before they acquired DADiSP. With the testing and analysis done at Allied Signal, you will never have to notice your brakes working.