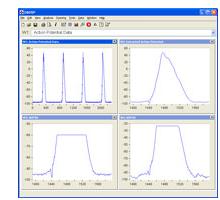 Dr. Byrne's research team uses DADiSP, the graphic display data processing software product, by DSP Development Corporation, to measure action potentials generated by healthy and unhealthy hearts. To begin the process, researchers take selected tissues from the hearts of small experimental animals. The tissues are placed in a tissue bath, then one cell of the tissue at a time is impaled with a microelectrode. The microelectrode sends signals to an amplifier and oscilloscope for display; the data are also digitized at 1000-3000 Hz and stored on the lab's personal computer, where they are displayed and analyzed with DADiSP.

A batch file is used to start DADiSP and to designate a command file which automates data file import, worksheet and window setup, and data analysis. Decision points, which are built into the command file, allow the operator to follow every step of the data analysis. Dialog boxes prompt the operator to select files for import, to set and adjust cursors, and to per whatever other operations are necessary before each critical measurement. The program first imports a waveform representing the data points recorded by the microelectrode. Next, it takes the waveform's derivative and uses it to extract one action potential at a time. The program uses information from the derivative to measure the waveform's diastolic potential -- the electrical activity present between beats. This measurement is used as a baseline against which to check other measurements later in the analysis. After extraction, the program measures the maximum velocity and amplitude of the upstroke of the action potential. These measurements show how strong the recorded beat is, which gives an indication of the chemical balance across the cell's membrane, and therefore of how much oxygen is available.

Anti-ischemic drugs either cause the amount of available oxygen to increase, or help a cell produce a strong beat even when it is less than optimally oxygenated.The action potential's width is measured last. In most electrophysiological research, this measurement is taken when the voltage has returned halfway back to the baseline from the peak and when it has returned 90% of the way back. These measurements are used to calculate the amount of time a cell needs to recover from a beat: if a cell isn't getting enough oxygen, it will tend to recover quickly and rest a long time before beating again, which will throw it out of rhythm with the cells around it. Anti-arrhythmia drugs lengthen recovery time so that all cells in one area can beat at a similar rate.

After all measurements have been taken from an action potential, the program prints out the calculated values, which it has also stored as macros, and prepares for the operator to quit or to start another analysis. Dr. Byrne says that if he weren't using DADiSP he would have to measure action potentials either by working with digitized signals in a spreadsheet or by taking photos of the wave-forms displayed on the oscilloscope and measuring them by hand. He prefers DADiSP to either of these solutions because "DADiSP allows me to visualize the signal and to make fast, accurate measurements". Using a command file to run DADiSP is a par a particularly useful approach for him, because he has to take hundreds of identical measurements with great speed. Evaluating the action potentials of healthy and unhealthy hearts, and how newly-discovered and already-known drugs affect them, provides information that can improve the quality of life for patients with oxygen-deprived hearts.