Wiedner's group copes with the hostile environment they need to measure by using a wind tunnel with a bend in it to simulate the air movement inside an engine, and by using the graphic display data processing 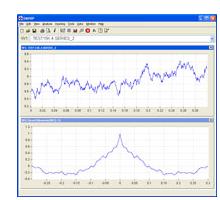 software DADiSP, by DSP Development Corporation, to get the most out of the data they collect.

The wind tunnel has a square cross-sectioned 90-degree turning duct test section which produces some of the same complex aerodynamic and heat transfer phenomena present in an actual turbine passage. Fluctuations in velocity, or turbulence, have been found to play a large role in the rate of heat transfer from free-flowing air to the tunnel wall, so Wiedner collects data from the turbulence of the air stream passing through the tunnel and uses DADiSP to analyze and correlate those measurements with heat transfer rates at various test section surfaces. Data are collected with a hot-wire anemometer system consisting of a hot-wire sensor controlled by an anemometer. A data acquisition card controlled by a personal computer samples the sensor output at a rate of 15 KHz. The sampled signal is converted to a free stream velocity history and stored. The data are logged to the computer's hard disk and are then ready for processing with DADiSP.

DADiSP is used to extract the fluctuating component of the waveform, calculate the autocorrelation function of the fluctuations, and normalize the function with respect to its maximum value. Next, the peak value and first zero-crossing of the function are located and used for integration and multiplication by the mean velocity to get the integral length scale. DADiSP's RMS (root mean square) function is used to find the intensity level of the fluctuations as a percent of the mean velocity. This analysis procedure is repeated for each set of data acquired at each of several positions in the flow fields of the wind tunnel and in other turbulent conditions. The products of the analyses are compared to heat transfer measurements taken at the same sites. The resulting correlations give some idea of the way air flow affects heat transfer.

One of the features Wiedner appreciates most about DADiSP is its ability to read in large data files. "We have several time series of data taken for several seconds at high sampling rates, so we end up with great big files that need to be loaded in and analyzed as a continuous group." Wiedner also notes that appreciation for DADiSP is widespread in his lab, and says that "having one software package that integrates a lot of functions we need" is "a great advantage." Wiedner states that research like his will ultimately provide turbine design engineers with answers to questions that will allow them to design more effective cooling and protection schemes, so that turbines will one day be able to operate at even greater efficiency. This kind of work, he says, will "propel the gas turbine industry into the 21st century."