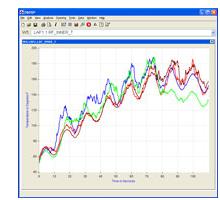 Mark Harrah uses DADiSP, the graphic display and data management software by DSP Development Corporation, to keep Jasper's vehicles fast and safe. In conjunction with a field computer, Mark and his Jasper team depend on DADiSP for engine development before a car is brought to the track and for testing it once it gets there. They use DADISP to analyze various chassis and engine functions on a car to determine what configurations work best.

Jasper's on-track testing takes place on tracks at Michigan International and Daytona. A car is driven for a few laps to get baseline recordings of the relevant parameters; then one component of the engine function or chassis at a time is systematically changed. Measurements are taken which indicate how the change affects the car's performance. Seventeen sensors are run-ning on a car while it is on the track. A data acquisition module is used to acquire several kinds 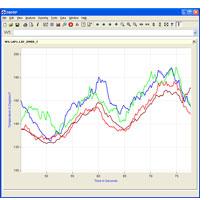 of sensor input simultaneously. After a run, the car is brought into the pits and the data are downloaded into a laptop and analyzed with DADiSP.

In the first part of testing, temperature data are acquired on the outer, middle, and inner surface of a car's tires by means of infrared sensors in three places on each tire. This analysis indicates the camber, castor, and toe-in of the car at different ride heights as well as in the corners of the track. DADiSP helps determine the weight distribution of the car by measuring and displaying the temperatures of the tires. Next, RPM sensors are run on the engine and on the differential to determine the maximum and minimum RPM of the engine. Wheel RPM measurements are taken to determine proper gear ratios. Exhaust gas temperatures are measured to determine proper carburetor jetting and manifold distribution. Data are then extracted from a 3-axis accelerometer to measure longitudinal, lateral, and vertical g-forces on the car, and a throttle potentiometer is used to measure the position of the throttle. Shock sensors measure the movement of the suspension and the velocity of the shock absorber. Finally, pressure sensors are run on various parts of the car to find high and low pressure areas, especially around the induction system.

Mark Harrah says that all of these tests "just touch on the surface" of how Jasper uses DADiSP to analyze and improve their racing vehicles. He says that DADiSP plays a very important part in helping them to hold their own in the most competitive racing in the world. He announces that, thanks in part to DADiSP, the Jasper Engine Winston Cup team recently placed 7 in the point standings of about 60 race cars. He says, "The next time you turn on the TV and see a Winston Cup race, root for the Jasper Engine car, and realize DADiSP helps us run up front."